September 25, 2019 2:06 pm
Shurtape recently joined Georgia Toffolo (Toff from I’m a Celebrity) to officially open a beautiful garden space at the Eden Ward of Wexham Park Hospital, part of Frimley Health Foundation Trust.
NHS Complementary Therapist Michele Martin, who works with the patients at Eden Ward, spotted the potential of the neglected outdoor space within the premises last year. She began a campaign to create a sanctuary for patients and families, securing funding outside the NHS – and we agreed to get involved after its we met Michele through our business network. 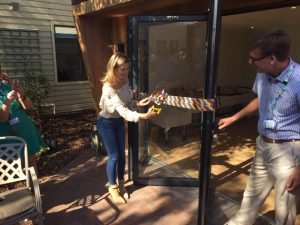 The journey was filmed as part of BBC One’s “One Day That Changed My Life” which aired earlier this year. On Thursday, 19th September the garden was officially opened by Toff, who has been personally involved in the project.
Volunteers, guests and patients joined Michele, Toff and the Shurtape Team to open the garden, cutting a giant ribbon made of Duck Tape.
Said Michele: “This has been quite a journey and we are delighted to officially open the garden. We are so grateful for everyone’s contribution – Shurtape, whose financial support helped us to build our all-weather pavilion, our other fundraisers and contributors, the staff who have helped – and help every day – and all the local businesses who gave their time for free. It’s wonderful.”
Our MD Colin added: “This stunning space is a testament to the determination of Michele and her team. We had been looking for the right charity partner for the business and Michele’s passion for her patients’ care won us over.  We were delighted to provide initial financial support and have also committed to ongoing fundraising and marketing activities across the business, to continue to support and help the hospital.”